On a cold, dark and damp December morning with growing uncertainties about Covid 19 cases a message was received from Santa that he really didn’t want to expose himself and his elves to such risks, but he did promise to make it up to all his disappointed followers in the Richmond Park Golf Club Seniors. The Annual Christmas Golf and Luncheon was duly postponed

True to his word early in February he emailed that on 29th March he would re-appear, albeit out of season, bearing gifts and he would also put on an event to remember. And so it was. Santa recruited Bjorn from his Norwegian branch to help, along with a chef and a team of golfing helpers. The only stipulation was that there were to be no Sprouts served with the meal.

So it came to pass that on the 29th March 27 Richmond Park Seniors assembled ready to do battle. The weather did the decent thing dropping about 10 degrees to a more realistic and cloudy 7 centigrade on the day.

Was that really snow on the trees by the bridge to the 12th tee, or could it even be early blossom? 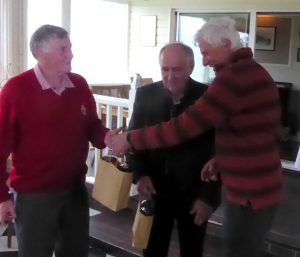 The members all powered round the course in fierce, well enthusiastic, competitiveness. There were some very interesting scores and some close run contests. In the end John Crowdy together with a new hip and playing partner Mike Hosier were beaten by a single point by Jeff Sutton and Bob Schwarz (seen here receiving their prize from Treasurer Geoff Tranter.)

In a separate competition for the Venerable Gentlemen over nine holes the results were just as tight with Bjorn Kjaraereng, the returning Norwegian elf, just beating David Hanks.

After the golf the players were joined by a couple of “walking wounded” members who joined in the raffle. £50 of the raffle proceeds were immediately donated to DEC for their relief work in Ukraine.

If any gentlemen of “a certain age (55+) out there are interested in joining a group of enthusiastic golfers who have no idea about what time of year it is, then please phone either Tony on 07836655428, or Geoff on 07704119980 and we will fix you up with a round – might even buy you a beer in the Club House afterwards.

Latest stories from the community

We use cookies on our website to give you the most relevant experience by remembering your preferences and repeat visits. By clicking “Accept All”, you consent to the use of ALL the cookies. However, you may visit "Cookie Settings" to provide a controlled consent.
Cookie SettingsAccept All
Manage consent

This website uses cookies to improve your experience while you navigate through the website. Out of these, the cookies that are categorized as necessary are stored on your browser as they are essential for the working of basic functionalities of the website. We also use third-party cookies that help us analyze and understand how you use this website. These cookies will be stored in your browser only with your consent. You also have the option to opt-out of these cookies. But opting out of some of these cookies may affect your browsing experience.
Necessary Always Enabled
Necessary cookies are absolutely essential for the website to function properly. These cookies ensure basic functionalities and security features of the website, anonymously.
Functional
Functional cookies help to perform certain functionalities like sharing the content of the website on social media platforms, collect feedbacks, and other third-party features.
Performance
Performance cookies are used to understand and analyze the key performance indexes of the website which helps in delivering a better user experience for the visitors.
Analytics
Analytical cookies are used to understand how visitors interact with the website. These cookies help provide information on metrics the number of visitors, bounce rate, traffic source, etc.
Advertisement
Advertisement cookies are used to provide visitors with relevant ads and marketing campaigns. These cookies track visitors across websites and collect information to provide customized ads.
Others
Other uncategorized cookies are those that are being analyzed and have not been classified into a category as yet.
SAVE & ACCEPT